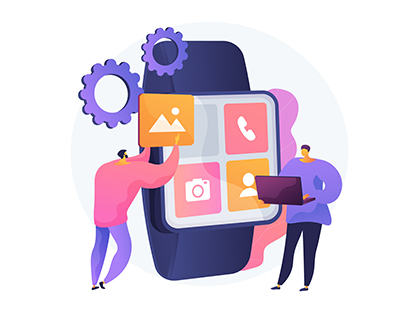 Mobile application development is the bundle of tasks and procedures is the part of writing software for small wireless computing devices such as tablet, smartphones and other hand-held devices.

Today, the two most pioneer mobile platforms pioneer mobile platforms are iOS from Apple and Android from Google. Apple’s phones and tablets are preloaded with necessary applications, with a full web browser and the Apple App Store. In same way android devices also come preloaded with similar apps and also you can install more apps on Google Play Store.

In the early days of mobile apps, the only way to ensure that an app performed perfectly on any device was to develop the app natively. This meant that new code had to be written particularly for each device's specific processor. Nowadays, most of the mobile applications developed are device-agnostic.

Earlier, if a software application required to be cross-platform and run on various operating systems, there was little if any code that could be reused from the beginning stage of development project. Each device requires its own mobile app development project with its own code base. The Recent cross-platform tools use common languages such as JavaScript and C# to share code over projects; especially, they integrate well with application lifecycle management tools, such as Jenkins. This allows developers to use a single codebase for Google android, Apple iOS and progressive web apps (PWAs).

PWAs are built to utilize benefits of native smart phone device aspects, there is no need that the end user should visit an app store to make a purchase and download software locally. Instead, a PWA can be located with a search engine query and utilize instantly through a browser, thereby evict the need for e-commerce merchants to develop native apps for multiple mobile OSes.

Before developing an app, you need to determine which sort of app you'll be developing. Here we listed below several types of mobile app development technologies with information about each.

Native applications:These applications are built by integrated development environments (IDEs) and languages for mobile OSes such as Google Android or Apple iOS. Native apps permit you to customize necessary features, but they can be more expensive than other technologies.

Hybrid apps:These are web apps that works like native apps. They are developed by using technologies such as HTML, JavaScript and Cascading Style Sheets (CSS). Hybrid apps are more budget friendly to develop than native apps and can be created faster, but they aren't as feature rich as native applications.

Progressive web apps:A PWA is a website that looks and behaves as similar as native mobile app. These are the browser-based applications which is developed with web technologies such as Facebook React.

Frameworks and libraries:These are the programming codes which might be written by someone else, and we can reuse it to accelerate our development of a mobile app.

Costs of developing a mobile app

The cost of developing an app can range from almost nothing to millions of dollars -- it all depends on the type of app and its intended use. Following is a breakdown of the ranges you can expect to pay for building a mobile app:

No-code app builders:A developer doesn't need to know how to code if the app has basic feature requirements. Free tools such as GoodBarber, Appery.io, Shoutem, Appy Pie and BuildFire offer the freedom to build apps without learning Swift or other programming languages. Although these tools are limited in their functionality and can't be used to create a game with no-code apps will meet most organization's needs.

Enterprise apps:The concept of Citizen Developer, where anyone can build a mobile app, is exploding with tools such as Amazon's HoneyCode, Mendix and Microsoft Power Suite. These devices offer drag-and-drop interfaces that can connect to data sources and manage content flow. The price is typically tied to a monthly subscription of less than $50.

Mobile optimized website:Although it's most practical to build websites for both desktop and mobile devices, the website content management tool you're using will likely have plugins you can buy for less than $100 to optimize your website for mobile devices.

Complex apps:An app that requires features, such as 3D, gaming or sophisticated artificial intelligence (AI), will likely need to be developed as a native app. The cost for a complex app can typically be $250,000 or more. The price is directly related to the scarcity of mobile developers.

What is the mobile app development process?

The following steps should help you develop the framework for building an app.

1. Define your strategy based on the answers to these questions:

What is the objective of your app? What problems will it solve?
Are there existing apps that perform this function? If so, what do they do well? What are they lacking?
Who is the app designed for?
Will you be hiring developers or using an internal team?
What is your business model?
How much are you willing to invest in developing this app? Will you have investors?
How long will it take to build this application?
What is your marketing strategy?
Are you designing your app for one of the app stores? If so, do you have the necessary licensing agreements and design and testing criteria?

3. Develop your product roadmap using findings from the previous step. This will enable you to create a step-by-step process for assessing your priorities and deliverables.

4. Select app development tools based on your requirements.

5. Begin app development. An agile process is best for building apps. Adopt a DevOps mindset when building the app. DevOps is a modern delivery methodology that uses key functions, such as:

6. Create your prototype so you can share the app with your investors or other stakeholders. Use their feedback to refine app development and further testing. This includes testing for functionality, performance, and ease of navigation.

7. Once the app passes these tests, it's time to roll it out to users for official beta testing. This process includes multiple rounds of review and incorporating user fixes prior to creating a deployable version of your app.

Once your app has undergone the requisite testing and review, it's ready to deploy. At this point, create a channel for feedback from users and provide continuous support.